The use of AI technologies in the area of conversational interfaces is growing considerably. In domains like Insurance, Banking and Financial Services, and Travel & Transportation, the potential that the conversational interfaces hold is quite immense although the level and extent of integration of AI in all these interfaces is varied. Conversational interfaces are text-based or conversation-based and operate on web or mobile or custom device channels. Though they may all be rolled under the general category of ‘Chatbots’, in reality, they can range from simple domain-specific Chatbots to smart task-oriented Chatbots to Intelligent Agents (IA) with a wide capacity to learn. Conventional testing methodologies and tools fall short if they were to be used without appropriate modification for AI-infused conversational tools such as Chatbots. Coforge 3-D QA Framework for Testing AI-infused Conversational Interfaces is a comprehensive, end-to-end framework that covers various dimensions ike channel integration, conversation flows, and monitoring. The assurance of these dimensions is accelerated by our conversation test accelerators that includes Train-Test-Label approach and frameworks and methodologies for automation, performance testing, security testing, and experience dashboard.

Since the objectives of deploying Chatbots are quite different from those of traditional applications or tools, it is not ‘business as usual’ for the teams charged with testing such conversational interfaces. The considerations that are missed by traditional testing when it is singularly focused on functional testing of Chatbots are:

It is imperative that these special considerations are integrated into planning and execution of test strategies for AI-infused conversational interfaces so that they can deliver higher rate of business success than traditional tools.

When Coforge found that many of its customers were intent on leveraging AI-infused Chatbots in their operations, it was enthusiastic in applying its niche expertise in AI acquired worldwide but, found that the individual customer journeys were quite different. Some of them would start with simple support Chatbots to answer domain-specific questions and not upgrade them while some others would move through the transition of Support Chatbots to Intelligent Chatbots very quickly. The customer needs and ambitions were quite different just as their capabilities were.

There was a strong need for a scalable framework based on a comprehensive testing methodology that can handle multiple channels, devices, conversational methods, and market leaders such as Amazon Alexa, Google Home and Facebook Messenger. This would allow customers to start with the type of Chatbot they are comfortable with and progress at a desired rate without changing the foundational test platform, tools or methodology at all. They can plug the standard tools into/out of the platform as needed without major changes to tools or skilled resources managing them. In fact, Coforge found that the lack of standard and scalable test platform was the single biggest reason for project delays and non-realization of desired business results despite investing the required resources. 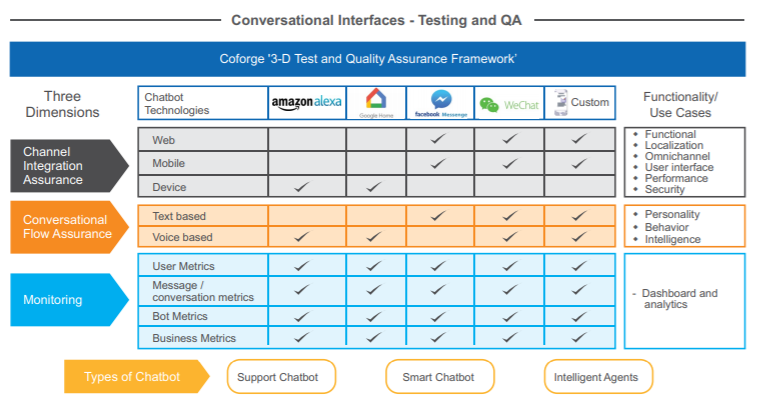 The 3 dimensions that were well integrated into the framework are Omnichannel integration, conversational flow and monitoring which can work with the leading conversational chat tools in the market. The framework will work equally well across simple Support Chatbots, Smart Chatbots and Intelligent Chatbots. There are also test planning tools that will ensure that the key considerations of functionality, localization, user interface, channel-specific capabilities, performance and security are addressed adequately for better success rate in the field. A special emphasis is also laid on testing the personality, behavior and intelligence of Chatbots by appropriately quantifying the subjective nature of the tests. A comprehensive dashboard with key test results and trends through advanced analytics will ensure deep insight into the performance of Chatbots. 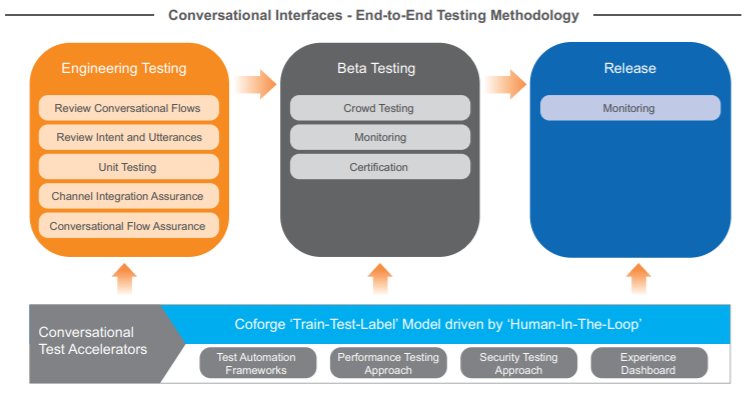 The feedback is used to strengthen the responsiveness and success of the system by training the AI-infused system to learn from experience in a way that it can be recalled when a response needs to leverage it. The confidence level in the system itself gets a boost by continuously training, testing and labelling the information appropriately as it is captured in various phases.

Another important step in the test and release cycle of an AI-infused application is an orchestrated exposure to a wide variety of real world users, conversations and situations. One of the ways of doing that is to have the AI-infused application like Chatbot to go through a ‘Crowd Testing’ phase. Crowd testing, by design is a random mix of users who enroll themselves for testing the application. This will ensure that several language styles, conversations flows and cultural accents are tested ahead of release. This will go a long way in strengthening the application for success in the field.

There are a number of key conversational test accelerators that need to be integrated for assurance of the core intelligence and the design of an AI-infused application. An extensive suite of accelerators for automated testing, performance testing, security testing, and experience assessment need to be in place. So that the various conversational test suites can be run repeatedly all through the application life cycle. These will not only speed up the application release process but also ensure the confidence level of conversations every time.

The key capability of AI-infused systems is its deep ability to learn. Data identified for application training purposes is used to generate the required test conversational data. When the test data is run through the AI-infused application, it produces a clear decision based on both structured data insights and unstructured knowledge reasoning. However, the litmus test applied to each output from the application is the confidence score assigned to it based on validation with training data. The principle of continuous learning is enabled by labeling low confidence results explicitly as pass/fail while high confidence results flow down the process without any additional modification. This incremental approach will help AI-infused applications generate exquisitely better predictions over time.

Testing conversational interfaces manually could be very cumbersome and error-prone for multi-platform, voice, and text based chatbots. Therefore, automation of conversational interfaces becomes important, so that test suites can be executed repeatedly throughout the application lifecycle. The automated testing can be executed over the UI, as for voice based chatbots or can be tested using the backend web services. The latter is used where chatbots are built on standard UIs like Facebook, Skype etc. In addition to testing the utterances and their responses, automation frameworks for conversational interfaces, could have the following enhanced capabilities:

There are several other exciting possibilities in the areas of Banking & Financial services and Insurance as well. There are a number of banking and fintech companies deploying conversational and test-based Intelligent Agents in the areas of customer acquisition and matching appropriate loan products to the customer through easy, friendly and empathetic conversations. AI-infused Chatbots are also appearing in quote and claims areas of Insurance providers. Some of the interesting use cases in various key industries are illustrated below: 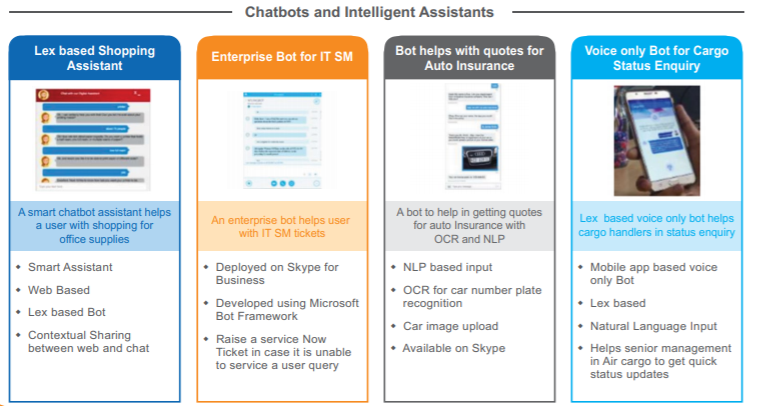 The Coforge Thought Board:

A Human-Centered Approach to AI Makes a Difference

AI-infused applications are quite unlike traditional systems or applications. There are a number of subjective situations and diverse user base that they need to handle with ease and efficiency. In order to ensure that the sophisticated AI-infused applications deliver their promise in the field with real users and complex situations, testing methodology needs to be evolved to encompass relevant conversational flow assurance and device versatility. This will need to be followed by a platform that concretizes the methodology in a tool form. The established framework needs to handle as many conversational interfaces as the business is willing to add to its scope as it matures. As a testimony to its experience and skill in this area, Coforge has one such 3-D Quality Assurance Test framework that has been verified by real customers.

However, what sets a winning platform apart from the rest is the human element that has been integrated into an automated test framework that works across the 3 dimensions of Conversation, Omnichannel, and Monitoring. The human element is critical in training the applications to learn from experience and foresee the expected situations. A holistic test framework such as Coforge’ 3-D QA test framework is one that balances the sophistication of the Artificial Intelligence with the versatility of the critical human element.

Thank you for submitting the form.

Let’s engage
SEND US A MESSAGE